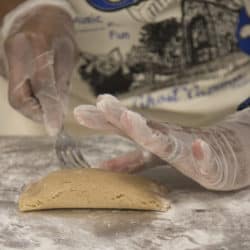 Whether you’re on small country roads or amongst the bustle of town, you can’t go anywhere in St. Landry Parish without seeing food. Travel along scenic byways and find soybean fields, rice bins, and a cascade of bright red crawfish traps bobbing on glistening ponds. Head into town and there’s no escaping the mass of specialty meat markets, boudin and cracklin stops, and eateries.

So, what made this particular region of Southwest Louisiana a foodie’s paradise, populated with enough smokehouses and specialty meat markets to make anyone with a black pot happy? The geographical region, a melting pot of cultural influences, and the parishes’ cattle industry are all responsible for the area’s delicious way of life.

St. Landry Parish, Louisiana lies on the eastern side of the Prairie Home Cooking Trail, a region whose cuisine is inspired by the traditions of its early settlers and Cajun and Creole inhabitants. The parish was first settled in 1720, when the French established, le Poste des Opélousas, an administrative territory and one of the earliest European settlements in Louisiana. Opelousas was home to a group of Indians by the same name. It was believed that the Opelousas tribe was very friendly and unafraid of the European settlers, even forming trading expeditions with them.

By 1791, the military outpost had been governed by the French and the Spanish and was also settled by some English, Scotch, Irish, and German colonists, as well as a group of Acadian exiles who managed to find their way to the lush and fertile lands of the district. Men and women of African heritage began arriving in the 1700s as slaves with the first Europeans and in the late 1700s as gens de couleur libres or free people of color.

Geographer, William Darby, describes an aerial view of Opelousas in 1817 as, “A vast expanse of natural meadows…with thousands of cattle and horses of all sizes scattered…in wild confusion.”

The settlers found the area perfect for agriculture and raising cattle, and the government post soon developed as a commercial center serving their farms and plantations. Cattle runs were often made to nearby, Church Landing, now the town of Washington. Washington is conveniently located along Bayou Courtableau and was once the most important steamboat port between New Orleans and St. Louis before the use of railroads. The town quickly became known for its transportation and dealings. Today, you can step back in time, to the steamboat era, at the Steamboat Warehouse Restaurant in Washington. The restaurant is the last of the of the old steamboat warehouses still standing on Bayou Courtableau.

Even today remnants of the history and cultures exist in the way we cook. German immigrants brought with them the process of smoking and preserving meats. In fact, The Cannatella Family still makes their own Italian sausage and muffulettas at Cannatella’s Grocery in Melville, Louisiana.

Agriculture is still a celebrated industry. Every year citizens recognize a leader in farm production at the Horses, Harmony, and Agriculture Awards Banquet. In March, the St. Landry Cattlemen’s Association invites chefs and home cooks to participate in the Here’s the Beef Cook-Off, where you can sample brisket, beef tongue, barbecue, and other beef dishes.

“In St. Landry Parish, food is a religion.”

It’s easy to see, that in St. Landry Parish, food is a religion, where every cook is a chef and we all practice the holy trinity — onions, bell peppers, and celery. To truly understand our faith in food, you need to sample dishes at area events and festivals. To help plan your food itinerary, we’ve highlighted the top ten culinary celebrations in the area.

In no particular order, these events are delicious!

1. Eunice Mardi Gras – Every year the Eunice Mardi Gras Association rewards Courir de Mardi Gras participants with gumbo at the end of the day. During the chicken run, revelers are treated with boudin. Also, look into the Lundi Gras Boucherie where you can sample pork dishes including ribs, crackling, and boudin rouge!

3. Annual World Championship Crawfish Étouffée Cook-Off – Everyone has a different etouffee recipe, but we all agree on one thing – you need crawfish and lots of butter. Chefs compete for the best etouffee while Cajun music bands play under the pavilion.

4. Crawfish Season – Okay, it’s not an event, but it should be. Every season locals make eating boiled crawfish a family affair, often inviting friends and neighbors over for a crawfish boil. Many restaurants sell boiled crawfish during crawfish season, typically from February to May.

5. Sweet Dough Pie Festival – Cajun sweet dough pie is area favorite. It’s a small, crescent-shaped pie filled with seasonal fruit fillings. Also, keep an eye out for “benne” or sesame seed praline, another local favorite. Every year in October, you can stock up on pies and even tour the Jesuit cemetery with costumed reenactors.

6. Port Barre Cracklin Festival – Eat all of the crackling you want for three whole days! For over 30 years the Port Barre Lions Club has attracted travelers from across the U.S. for fried pork and Cajun music.

9. Soiree Royale-Acadiana Chef’s Competition – Every September, professional chefs from the Acadiana region compete in several categories. Guests get to samples and put in their vote for Taster’s Choice!