“St. Landry Parish, Louisiana is a place with Cajun spirit and Creole soul.”

Cajuns are descendants of the Acadians, who were evicted from the region of Nova Scotia in the mid-1700s, after their continued refusal to swear allegiance to the British crown. Many of these Acadian exiles landed in south Louisiana, where they blended with other groups to have a lasting impact on the state’s language, music, and food.

Creole is broadly defined and has numerous definitions that vary in different regions of the state, country and the world. In St. Landry Parish, many Creoles identify themselves as the descendants of slaves and free people of color. Many trace their lineage to the Caribbean and Africa and even speak in Creole.

Creoles have heavily influenced the region’s culture, especially with zydeco, the accordion-driven, dance music that now has fans across the globe. Accordionist Amédé Ardoin, a native Creole of St. Landry Parish, is widely regarded as a founding father of Cajun music and zydeco. 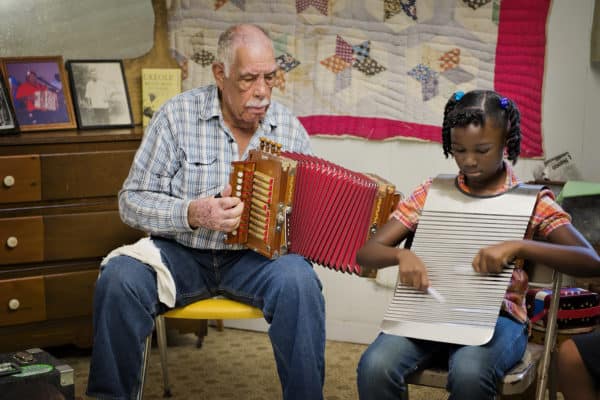 Today, both cultures are celebrated at festivals, music events, and local attractions. In Opelousas, you can learn more about Creole Louisiana at the Creole Heritage Folklife Center. The center is run by cultural icon, Rebecca Henry, who is a native folklorist and herbalist. At the center, she provides tours and workshops in either English or Creole and offers educational youth programs throughout the year.

For a taste of Cajun culture visit the Jean Lafitte National Park Prairie Acadiana Culture Center during their Saturday programming. The day starts with Cajun French conversation and ends with a Cajun cooking demonstration in the kitchen. Participants can also listen in at the French table or watch the quilting demo. At the end of the day, park rangers lock up and prepare for the Rendez-vous des Cajuns live radio show at the Liberty Theatre. This long-running tradition now showcases Cajun, Creole, and zydeco music artists. Locals music artist, Steve Riley, often host special shows at the Liberty such at the Cajun Fiddle Kings or the Creole Accordion Kings.

For more Cajun and Creole cultural events, see below!

Annual Experience Louisiana Festival – This festival is a tribute to every culture in Louisiana. The event is dedicated to showcasing Louisiana’s folk artists, diverse cultures, and addictive musical sounds.

Rendez-vous des Cajuns – This event is a weekly, live radio show hosted in the Prairie Home Companion format. The show features award-winning bands every Saturday night at the Liberty Theatre.